Sadly, the “Great War”, the “War to End All Wars” wasn’t.  It was triggered in July, 1914 by the assassination of Archduke Ferdinand of Austria and ended at the 11th hour on the 11th day of the 11th month of 1918, in a railroad car outside Compiegne, France; all at an unimaginable cost.   More than 70 million military personnel, including 60 million Europeans, were mobilized in one of the largest wars in history. Over nine million combatants and seven million civilians died as a result of the war (including the victims of a number of genocides), a casualty rate exacerbated by the technological and industrial sophistication, and the tactical stalemate caused by grueling trench warfare. It was one of the deadliest conflicts in history.

The United States had more than 4 million men and women who served in uniform, including  two future presidents 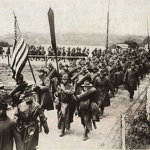 , Harry S. Truman and Dwight D. Eisenhower. Two million individuals from the United States served overseas during World War One, including 200,000 naval personnel who served on the seas. The United States suffered 375,000 casualties including 116,516 deaths; a casualty rate far greater than in WW II.  More than 350,000 African Americans served as did Native Americans and members of other minority groups.  And for the first time, women joined the ranks of the US armed forces.

Prophetically, President Woodrow Wilson expressed his belief that the War “must be a peace without victory…Victory would mean peace forced upon the loser, a victor’s terms imposed upon the vanquished. It would be accepted in humiliation, under duress, at an intolerable sacrifice, and would leave a sting, a resentment, a bitter memory upon which terms of peace would rest, not permanently, but only as upon quicksand. Only a peace between equals can last.”

Unfortunately that was not how it turned out.  During the Paris Peace Conference of 1919, the “Big Four” (Britain, France, the U.S and Italy) imposed their terms in a series of treaties. The League of Nations was formed with the aim of preventing any repetition of such a conflict. The effort failed.  Economic depression, renewed nationalism, weakened successor states, and feelings of humiliation (particularly in Germany) resulted and are widely seen to have contributed to the start of World War II.