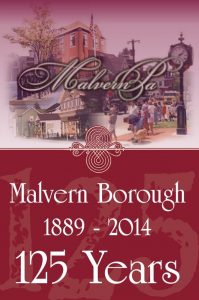 Although officially celebrating our 125th anniversary this year, the Malvern area was originally settled by Welsh immigrants in the 17th century who bought land from William Penn.Churches, trains, and a few businesses were the nucleus of the village. In 1835, the East Whiteland Baptist Church moved to what is now its church and cemetery property, bounded by Channing, South Warren & E. First Avenues &Roberts Lane. Changing its name to the Willistown Baptist Church, this institution then became the First Baptist Church of Malvern in 1900. One of the first businesses was a lumber and coal yard owned by Thomas Garrett and P.D Thomas. In 1879, the Malvern Friends Meeting was built at the corner of Woodland Ave and Roberts La.

Known for a long period as West Chester Intersection or just “Intersection”, the town’s name was changed to Malvern in 1873 when the Pennsylvania Railroad straightened its tracks through the village. No official origin to the naming of the Borough of Malvern remains, although several theories abound. The most common suggestions are Malvern Hills in Great Britain and Malvern Hill in Virginia. As our Malvern is situated on the south rim of the Great Valley, it is possible either location in Britain or Virginia influenced the decision at the time.

In May, 1884 after a particularly fierce fire destroyed Winfield Yarnall’s store, residents met at the Malvern Hall (on King St at Bridge) and decided to organize a fire company.

Malvern was incorporated August 13, 1889, having separated from the northern portion of Willistown Township. Ten years later in December 1894 a citizen’s group formed the “Public Library and Reading Room Association”.

In addition to the Paoli Battlefield site of the Paoli Massacre, which took place September 20, 1777, during the American Revolutionary War (visit <http://www.rememberpaoli.com> rememberpaoli.com) and Parade Grounds on which our Parade Ceremony takes place, Malvern is home to the Wharton Esherick Studio which is a National Historic Landmark and listed on the National Register of Historic Places.

To learn more about the history of Malvern, contact the Historical Commission or visit the History Center in the Borough Building on the second Saturday of every month.

Information from: A Century in Malvern edited by Nancy B Schmitt, Past Chairman; Malvern Historical Commission

For 146 years our community has joined together to honor the brave men and women who have served our country with honor and dignity. Our memorial ceremonies specifically honor those who served in our armed forces and have recently passed away.

This year we have added a new element to the ceremony with the introduction of the Malvern Tree of Honor. During today’s Memorial Ceremony the tree will be dedicated to the memory of those who have defended our freedom. A ribbon will be tied to a branch of the tree in honor of each name read.

We invite everyone to join in the remembrance. Along the Parade route, members of the Parade Committee are handing out ribbons and explanation cards. The ribbons will also be available in Memorial Park at the end of the Parade. You are invited to participate by tying a ribbon on the Tree in remembrance of your friend or relative who should also be honored.

The focus of events in the park has always been to bring the community together to honor the men and women who have served our country with honor and dignity, especially those who have recently passed away.

In 2014 we added the Malvern Tree of Honor.  During 2015’s Memorial Ceremony the permanent tree, donated by the Chester Valley Little League, will be dedicated to the memory of those who have defended our freedom.

We invite you to join in the remembrance.  Members of the Parade Committee are handing out ribbons and explanation cards.  Ribbons will also be available in Memorial Park at the end of the parade.  You are invited to participate by tying a ribbon on the Tree in remembrance of your friend or relative you wish to be honored.